When announcing a pregnancy, many people like to reveal the news with a surprise photo on social media or in person.

However, one? woman has left millions of people horrified and stunned after her unusual pregnancy announcement was posted to TikTok.

Best friends from the US, Janelle and Kate, who post videos of themselves "having fun and goofing off", shared a clip of the pregnancy reveal to TikTok, alongside the caption "She knew before her!"

When the clip opens at an outdoor bar, we see Kate's hand swap a straw for a pregnancy test... before heading over to a group of women drinking daiquiris.

"They were out of straws", we hear Kate, who is filming say... as we see a close-up of the frozen pink drink with the test in it.

As Janelle happilly drinks away and sucks on the stick, declaring the beverage to be "great", it is clear to everyone but her, what the stick actually is.

As other friends on the table try to stifle their giggles, Kate tells her friend to turn the stick around. As Janelle takes a closer look and realises what it is, she looks completely shock and asks "Wait, are you pregnant?"

"Wait, am I pregnant?," she asks again in disbelief.

"Yes, you're pregnant!," replies Kate as they all squeal in delight. "Did you sneak this into the toilet?"

READ MORE: Richard Wilkins gushes about the 'great joy' of being dad to his five kids

The viral video has now been viewed over three million times and has left people in stunned.

"I'm both horrified shrieking from laughter," said one.

"I have so many questions," commented another.

"Why did no one say anything?," screeched a third.

"Are we not going to acknowledge the fact that it was in her mouth?!", said another.

Other people pointed out that the lid was clearly still on the test so it wasn't as "disgusting" as it appeared on first sight. ?

"The sigh of relief I Iet out when I saw the plastic cover; I thought she was just licking the stick," noted one person.

?"This is so fake! All their videos are staged," confirmed another.

We have so many questions indeed. Above all - is Janelle actually pregnant? ? 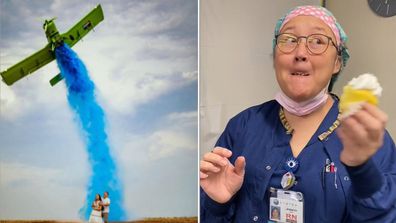 Property News:?Sunny playground where the growth is only just beginning - domain.com.au