The two youngest sons of Irish-born actor Pierce Brosnan have talked about growing up with a Hollywood superstar as a dad and revealed the lessons they have learnt from him.

By the time Dylan, 25, and Paris, 21, were born, Brosnan had landed the starring role of James Bond.

But despite the immense fame that came with that, they recall a ?fairly normal childhood with their dad apart from one thing: They thought he had lots of friends because he would always stop and talk to his fans.

In an interview with GQ, the brothers recall an idyllic childhood growing up largely in Malibu and a second home on the Hawaiian island of Kauai.

"I always thought he had a lot of friends, growing up," Dylan said. "Because people would come up to him in the street, and he's like the nicest guy, so he talks to everyone for a really long time."

Brosnan starred in his first Bond film, ?GoldenEye, which was released in 1995.

READ MORE: Meet the grandmother who will give birth to her son's baby: 'So eternally grateful'

Dylan was born two years later, right at the peak of his father's fame. Later, he would question his father about certain people he remembered from his childhood, asking, "Do you remember your friend, that guy who dressed funny and hung out by the movie theatre every day?" ˇŞ only to learn he was a fan.

When the boys were young, the family would travel between their homes in LA and Hawaii, where they had a very normal life.

"A bunch of kids running around a forest, looking for something to do, riding bicycles down the street, going to caves and swimming and surfing and stuff," Dylan said.

"I would be there and then come here for a few days. Kids would be like, 'Oh, yeah ˇŞ you're that guy. I went to fifth grade with you for, like, one week and then you left'."

They settled in LA for high school and college, but didn't like to talk about their famous dad.

In fact, when Dylan's closest friends showed up to the Malibu house for his 21st birthday party, they were surprised to find out his father was Pierce Brosnan. "I don't tell anybody that, under any circumstances," he said.?

The two brothers spent time on their father's movie sets when they were younger, and even worked behind the scenes on some of his movies as adults, but have so far heeded his advice not to get into acting.

?Instead, Dylan is a musician while his younger brother is a model and artist.

Both say they've learned a lot from their father's example, about preparation, passion, confidence, showing up on time and humour.

"Don't be afraid to make fun of yourself," Dylan said.

For his part, Brosnan is clearly proud of his sons, especially when it comes to the love of painting he shares with Paris.

"It just fills me with the greatest pride, fatherly pride, to be painting alongside him, just to be quiet in the garage or wherever we've painted. It's a really beautiful experience."

Brosnan himself trained as a commercial artist before getting into acting. He took it back up when his first wife, Australian actress Cassandra Harris, was battling ovarian cancer.

She died ?in 1991 at just 43, leaving him to care for her two children from a previous relationship, Charlotte and Christopher, and their son Sean.

Charlotte would also later succumb to the same disease.?

He met his second wife in 1994. They wed in 2001, and he marked their 21st wedding anniversary this year with a gushing Facebook post, writing, "Happy Anniversary my love @keelyshayebrosnan. We danced that night and still dance the dance today. I could do it all again."

He took to Instagram again in June to share a photo with three of his sons to celebrate Father's Day in the US. "?My love forever to you dear sons, Paris, Dylan, Sean and Christopher, thank you deeply for your love on this Father's Day." 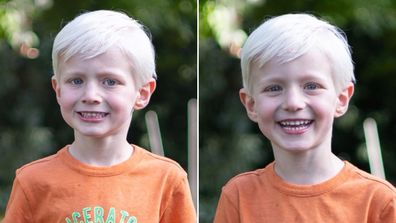